My 6 Minutes of Fame on Live TV

Ok, here we go. 6 minutes on live local TV. How am I feeling? Sweaty. Pretty dang nervous. I’m doing my best to quell the inner fear and angst with yoga, deep breathing, clary sage, and my CBD oil. I tell myself “just breath,” “just be yourself,” and “you’re going to die in 100 years anyway and this 6 minute stint will be just a tiny blip in the course of your life….in the course of human history!” (And yes I am going to live to 131. It’s called veggies and supplements, yo).

Let’s rewind a bit. I recently received an email through my blog about being a guest on the local news station’s “Afternoon Live” program. Would I be willing to come on and talk about tea and wellness? On live television? My immediate thought was SPAM! But then I wrote back, just to see what happened. And to my surprise, a real person (or seemingly real) responded! She asked me about potential dates to come to the set, topics I could cover, and gave me the address and instructions on how to get in. What?!

I was still feeling pretty skeptical. But also, the universe has been sending me lots of signs lately. Maybe this was one of them.

So I spent the next few weeks preparing, meeting with people who had way more expertise than I did for advice, practicing my lines, and worrying. Worrying a whole lot. Because I’ve never done this before. I’ve never been asked to be on television, let alone filmed live. What if I made a silly mistake or stumbled over my words? There’s no editing it out!

Can you over-prepare? Yes. I didn’t want to sound robotic. I didn’t want to rehearse my lines so much that I didn’t leave any room for whatever questions the host was going to ask (the unknown terrifies me, as I’m sure it does many of us!). I definitely wanted to give myself some time to unwind, relax, and meditate. I definitely needed it!

With sweaty palms and even sweatier pits (tmi?), I focused on breathing and meditation, trying to calm my nerves. And I kept reminding myself that I would be long gone in several hundred years and no one would remember if I stumbled over my words on a 6 minute television segment about tea. Is that morbid? Or just realistic? Either way, it really helps put things into perspective for me.

I arrived early because of Portland traffic. If you live in Portland, you get me. My check-in time was 1:30 but I didn’t end up going on air until 2:30. Imagine the suspense! I should have bought those underarm pads you put inside of your tee-shirt sleeves that sop up excess armpit sweat.

I was directed to the “Green Room.” I am sure this must be a television set term that I am unaware of. The room was surprisingly not green and I wondered if maybe I was in the wrong spot. There was a blindingly bright room where someone was putting on makeup. I resisted the urge to pile on a 7th layer of foundation. While I was waiting, the host came in and introduced herself. I’ve heard her on the radio (I’m a radio junkie)!

After about ten minutes, I was asked to come back into the bowels of the building where the set was. It was strange. There were lockers and storage and movable tables that they bring on and off the set. They placed me at a moveable table at the edge of the set next to someone who was cooking a bean soup. He was a regular and talked me down a bit as I nervously explained that I was a newbie.

Then the producer came out, gave me a better idea of what to expect, and then the segment was about to start! I sat behind the cameras for about 30 minutes watching all of the other guests do their segments. I was one of the last ones to go…sheesh! I was shaking and trying to just tell myself to breathe. There were only three other people in the room so I tried to ignore the fact that this was a live broadcast and just pretend that I was only talking to them. But I couldn’t fool my body. No matter what I told myself, my body continued to shake, rattle and roll!

And it went by in a flash. The host was about a foot taller than me (even after she took off her shoes). She asked a lot of questions and directed the conversation so that basically all I had to do was provide answers and showcase the teas I brought with me. While I didn’t get out all of my well-rehearsed lines, I think I did pretty well for my first appearance on live TV! But boy was I relieved when it was over. I headed home, took my shoes off, and flopped down on the couch.

I have to say, I feel pretty cool right now and supported by my network of friends, family, and colleagues. I put myself out there and found myself being lifted up by the wonderful people in my life. 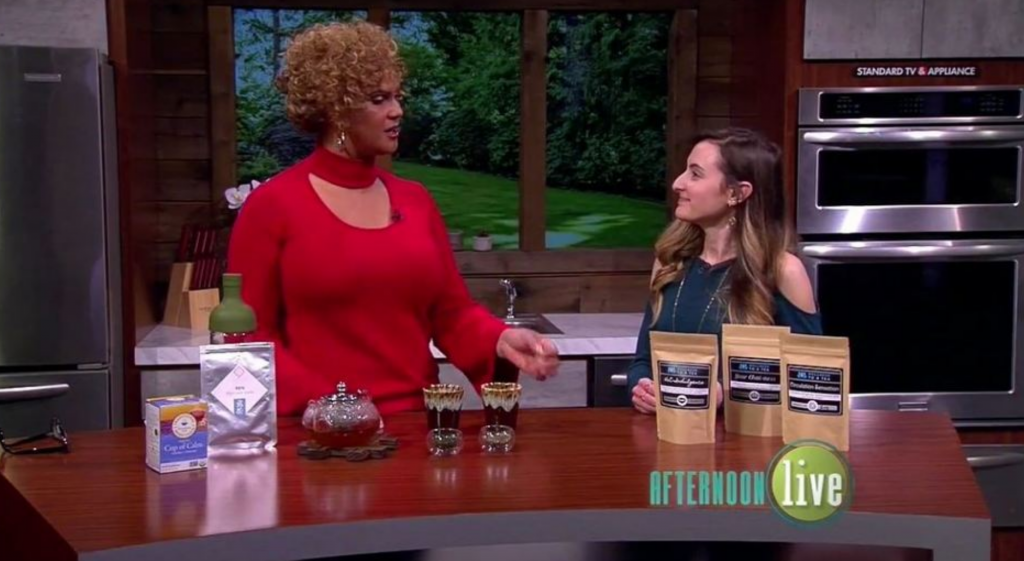 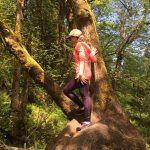 My Path Unfolding: My New Career and the Future of Wellness to a TeaUncategorized 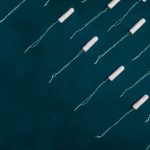 Do Women Need Their Periods? My Response to the Guardian Post on Birth ControlUncategorized